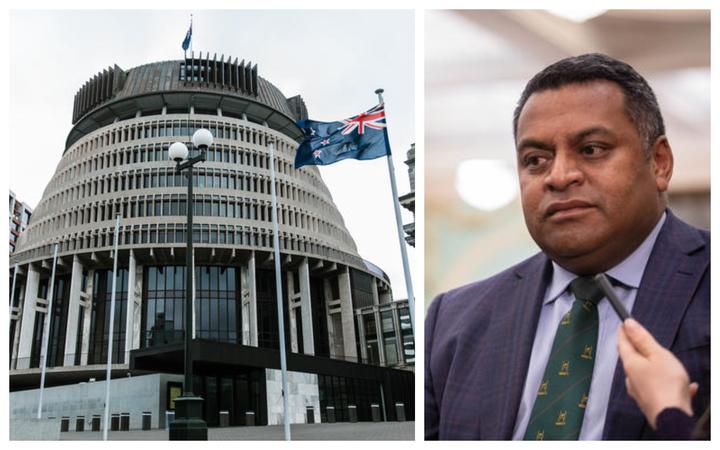 Amendment of the law to allow the deportation of potential terrorists, refugees on the cards

The government is wondering if it will change the law to allow potential terrorists or refugees who have committed serious crimes to be sent back to their countries of origin.

Before any changes to the law, Immigration Minister Kris Faafoi said other countries were being approached to see how they were handling the problem.
Photo: RNZ

And former justice minister Andrew Little has defended the time it took to draft tougher terrorism legislation despite warnings that those planning an act of terrorism were currently engaged in ‘lawful activity’ because that New Zealand had not made this activity illegal.

Authorities had attempted to detain him while he awaited a deportation appeal hearing – due to the risk he posed.

Immigration Minister Kris Faafoi said the government was discussing with other countries how they handled the deportation of protected persons – those at risk of persecution in their home country.

“We are currently in a phase where we are asking some experts for comments on the proposals. This includes talking to other countries about the schemes they have in place to relocate people. It is not as easy as it looks like it and obviously that was one of the sticking points with the individual involved.

“So we haven’t come to a final position yet. But we have, I guess – compared to where we were in September of last year, we have moved a lot of policy discussions forward.”

The government was told last July that although Samsudeen’s refugee status was revoked due to fraud in 2019, he would likely be considered a protected person under immigration law and was therefore unlikely that he could be expelled. He could not be detained for the purpose of being sent home if deportation was not a realistic prospect.

Little told parliament during a special debate in the days following the attack that the country would reflect on how a person protected by New Zealand laws embarked on a deadly mission as authorities knew the risk he represented.

“We granted refugee status to an individual, because of an alleged threat he faced – and yet he posed a significant threat to his fellow New Zealanders. any country, and that calls for us to look at our laws.”

Prime Minister Jacinda Ardern said she was concerned ‘that the law may allow someone to stay here who has obtained their immigration status fraudulently and poses a threat to our national security’ .

The issue of the deportation of a former refugee who can still be considered a “protected person” due to the continued risk of persecution in his home country was a difficult one, Little told RNZ.

“It’s about whether we entertain the idea that if we find that someone who receives refugee status poses a national security risk, that we act in the face of international law and that we give ourselves the power to deporting that person, obviously following due process – That’s one of the challenges we have to face.

“It’s not in my bailiwick [jurisdiction], so I’m not actively considering it. But it’s an issue that certainly at the time, September last year, was raised with us for ministers to consider.”

Immigration officials appeared before the select committee last week to discuss their work.

‘We are working with ministers on the current sufficiency and adequacy of the Immigration Act as it relates to addressing national security issues,’ said the Acting Under Secretary of Labor, Science and Business , Ruth Isaac.

Police outside LynnMall on the day of the attack.
Photo: RNZ / Marika Khabazi

This is not the only law that has proven to be insufficient.

A regulatory impact statement summarized the problem that the new terrorism legislation would eventually solve – but it was not by September 2021 – that planning or preparing for an act of terrorism was not a criminal Offence.

“If a person or entity undertakes to plan or prepare to commit an act of terrorism, it would be a lawful activity. Relevant agencies, such as the New Zealand Police, could only act in the face of a threat This requires a very high-risk approach of waiting until someone becomes a legally justifiable ‘immediate threat’ and this is detected in time to intervene.”

Prosecutors had tried to bring terrorism charges against Samsudeen, a High Court judge who heard his case noting in 2020 that the lack of a planning an attack offense could be an Achilles heel in the law .

But the government has denied it had not acted quickly enough, following warnings from security agencies five years ago that terrorists planning an attack could not be prosecuted.

The SIS informed its Minister, Andrew Little, in 2018 of the risk posed by Ahamed Aathil Mohamed Samsudeen, and that “the current legislative parameters are not adequate to prevent potential terrorist threats in New Zealand”.

Little, who also served as justice minister from 2017 to November 2020, defended the three years it took to commission work and consult on changing the law.

The bill had not reached its second reading when the Sri Lankan refugee stabbed shoppers at LynnMall in September. It was adopted on an emergency basis less than a month after the attack.

The police had been the lead agency in the round-the-clock surveillance of Samsudeen, who last winter spent four years in jail, mostly on remand, on charges that eventually resulted in convictions for possession of a knife, refusal to assist the police, possession of restricted and objectionable material and fraud.

Police said they could not calculate the cost of their surveillance operation in the seven weeks between his release and the day he was shot dead by undercover officers. But he said around 40 staff – not all of whom were working full-time on the operation – were supported by around 130 other staff, including 25 special tactical group officers.

In a meeting with Little a month before the attack, SIS Director General Rebecca Kitteridge “highlighted the long-term discomfort of investigating this surveillance space with the assessed risk the target presents” . Several written SIS briefing notes note that Samsudeen “presents a high risk of undertaking a domestic act of faith-motivated extremist violence”.

“We estimated that the target would likely mobilize towards an act of domestic violence at some point, advise that the target’s lifestyle is not consistent – making it difficult to predict or plan their movements “, said an update.

An SIS chart showed that “probable” and “probable” meant a probability between 50 and 75%. Its September 1 quarterly update – two days before the attack – reported a medium terrorist threat level.

Little, minister in charge of the SIS and minister of justice during the first government led by Ardern, pointed out that the shortcomings of the anti-terrorism laws were first identified in 2007.

“But nothing had been done until I was first briefed as justice minister in 2017. So I was briefed very early on when I was minister of justice. Justice, and together with the Prime Minister in his capacity as Minister of National Security and Intelligence commissioned the work in early 2018 to fill these gaps. [A MoJ document says that happened in late 2018.]

“The nature of this political work is detailed and complicated. It does not just involve the Ministry of Justice and the DPMC – in addition to intelligence agencies, the police are involved and because it criminalizes actions, which, on the other hand, could actually be completely innocent actions, this is a very difficult area of ​​law drafting to master.

“We knew it would take a reasonable amount of time, the political work was done by 2020. That’s how long it takes to deal with complicated politics.”

Work on amending the Suppression of Terrorism Act was commissioned in 2018 and the bill was presented to parliament in April 2021.

Little says the time it took to draft and enact the legislation was necessary. “It’s important when we come up with criminal laws of this nature, and it’s at the tough upper end of criminal laws in complex areas, that we get the policy right to get the legislation right and I’m convinced that the proper time was taken to do the work.”

Consultations were held with government agencies and 15 academics and legal practitioners.

The legislation under which the agencies operated is not part of next month’s review, which will examine how police, corrections and SIS handled Samusudeen, and whether they did enough to assess and respond to the risk that Samsudeen was posing.