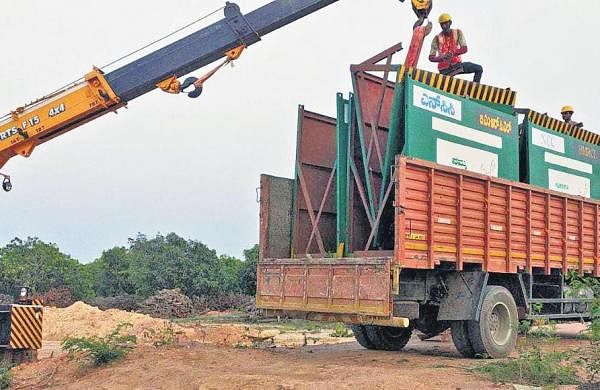 BENGALURU: Those heading to Kempegowda International Airport from Monday will have to make do with restricted road space as the Bangalore Metro Rail Corporation Limited (BMRCL) will barricade part of the Main Access Road (MAR) from the MS Ramaiah gate to the terminal for infrastructure works related to its Airport Line.

In another significant development, Metro has just started work inside the border area of ​​the airport where Terminal 2 is currently under construction. The blue metro line, a combination of the outer ring road and the KR Puram line at the airport, will be 55.8 km long. It will start from the Central Silk Board to KIA and will have 32 stations. Of which, the last two terminal stations, Airport City and KIA Terminal, will be built by Bangalore International Airport Limited (BIAL).

Speaking to the New Indian Express on the blockade on the road, a senior metro official said BMRCL would erect barricades 13 meters wide. “It would be a single stretch along the middle of MAR from the MS Ramaiah gate (trumpet end) that would cover both sides as well as the barricades. We will carry out the barricading in phases. The airport authorities have authorized the transport of our construction vehicles in this barricaded part. Initially, we are considering blocking only a length of one or two meters,” he said.

BMRCL is to complete the full 6km stretch from the Ramaiah Gate portion, the official added. “Building materials will be transported here for piling works (laying the foundation) and laying the pillars,” the official said. BMRCL had started preliminary works on the airport road two months ago.

BMRCL chief executive Anjum Parwez said work inside the airport area started on Thursday. “What we mainly do near Terminal 2 is pick up our line inside the airport grounds. The airport stations will be built by BIAL. We establish the connectivity on our side.

Concerning the state of the whole line, he indicated that it was awarded to three contractors in five lots. “At least 25 U-beams have been prepared by Afcons Infrastructure (lot 1 construction) and Shankar Narayana Constructions (lot 2) at their casting yards near Hoskote. Nagarjuna Construction Company, which won three lots, was preparing two casting sites, including one in Doddajala. U-beam technology is faster than the traditional segment laying system,” he said.

Rashtriya Military School station layout needs to be changed
To minimize the land to be removed from All Saints Church and reduce the number of trees to be felled for the Rashtriya Military School metro station in the underground corridor of the Nagawara-Kalena Agrahara line, BMRCL decided to modify the layout of the station. BMRCL MD Anjum Parwez said: “Instead of the 3,800 m² of land, we will acquire 166 m² of permanent land and 227 m² of temporary land.”

Tender for 72 cars for the Ph-II metro as a backup plan
BMRCL has issued a tender for 72 coaches for its Phase-II metro lines as a back-up plan in case China’s CCRC Corporation Ltd fails to fulfill its promise. He had received an order for 216 coaches by BMRCL earlier. Metro previously sued the company over the matter. The Baiyappanahalli-Whitefield line is due to open by the end of December and the delivery of these coaches is vital.