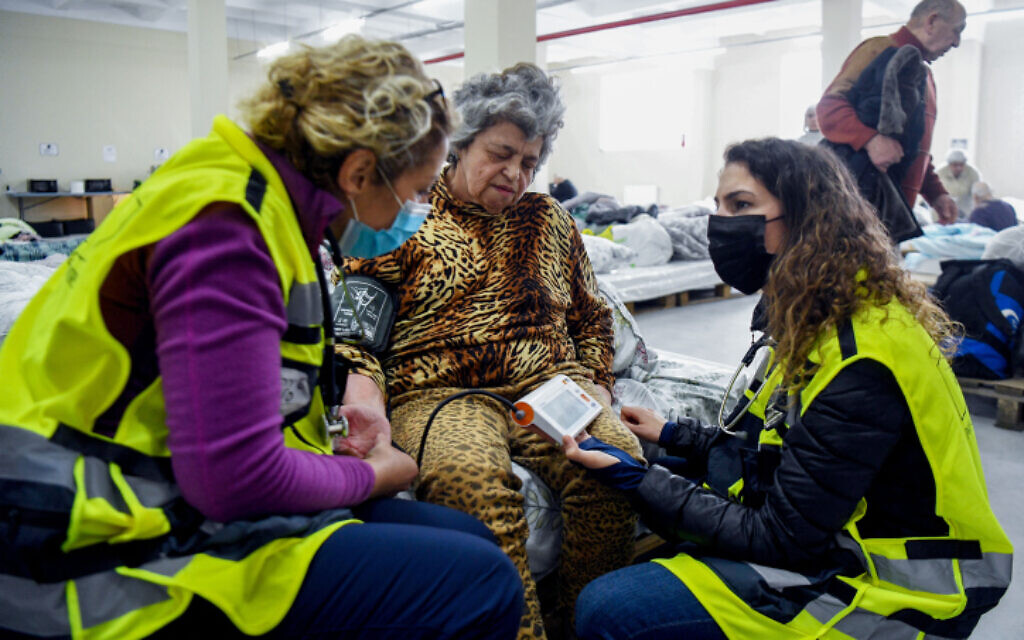 CHISINAU, Moldova — Determined to send food and medicine to his 87-year-old grandfather, who is stuck in the city of Kharkiv, an Israeli eye doctor from Ashdod has teamed up with other volunteers to deliver supplies essential to hospitals in Ukraine.

Dr. Katrina Kiroshka immigrated to Israel from Kharkiv in 2014, as part of a campaign by the state and the Jewish Agency in countries of the former Soviet Union. She is currently undergoing specialist training in the eye department of Barzilai Hospital in the southern city of Ashkelon.

Kharkiv, Ukraine’s second largest city, has been under a constant barrage of Russian bombs and shells.

Having failed to find medicine herself in Kharkiv, she turned to hospitals in the city, only to find that they, too, were in short supply. She asked hospitals to send lists of what they needed, then raised money from friends to buy the drugs in Poland.

These were transferred to volunteers at the Polish-Ukrainian border who took them to Kharkiv.

“At the start of the war, most of the requests were for medicines that were missing,” said Roman Rosengurt, an Israeli who has lived in Ukraine for a few years and who, after taking his family out of the war country, is helping Kiroshka deliver medicines. medicines and other items where needed.

Rosengurt and others collect medicine, food and clothing at the border near Lviv and load them onto buses returning to Kharkiv, after the refugees the buses have brought disembark.

The buses are driven by Sergei Gromov, an Israeli who arrived in Kharkiv just before Russia invaded the country.

This week, Kiroshka finally handed over the medicine and food to her grandfather, “in the hope that they will last him until the end of the war”, she said.

She and her friends have now started a non-profit organization called Israeli Friends of Ukraine.

Roman Rosengurt in Lviv, Ukraine, with some of the medical equipment. (courtesy)

“Our campaign to collect donations from friends will not be enough in the long run,” she said. “Drugs and other items cost money, transportation is very expensive, and the rate of requests is only increasing, day by day.”

Kiroshka is one of many Israelis in the medical field trying to help Ukrainians caught up in or fleeing war.

Dr Yelena Katzman, who left the Ukrainian city of Sumy two decades ago, is a family doctor and director of a Clalit health fund clinic in the central Israeli town of Shoham. Katzman dropped everything to fly to Moldova and helps out at a central hub in Chisinau where refugee buses are brought as soon as they enter the city.

Katzman immigrated to Israel from Sumy 20 years ago and helped translate and talk to newcomers. “It’s not just about medical care,” she said. “People just want to talk. They just want you to look them in the eye.

Katzman flew to Moldova with five members of Brothers for Life, an organization of former IDF soldiers injured in military service who reach out to others going through hardship. “It was people with post-traumatic syndrome who came to help,” she said. “Each has their own remarkable story.”

Ukrainians wishing to travel to Israel raise their hands at the hub in Chisinau, Moldova. The hub, established by the Jewish Community of Moldova and the Joint Jewish Distribution Committee, is the first point refugees arrive at after reaching the Moldovan capital. (Sue Surkes/Times of Israel)

A Russian-born Israeli psychologist, who declined to be named, was also at the center, dealing with “a lot of psychotrauma,” he said.

“People who come here have seen their homes destroyed, people killed. They have been on the road for hours, even days. The hub is the first place they feel any measure of security. But they feel like they’ve lost everything, are now homeless, and have become pathetic individuals to be cared for. There is a loss of self-esteem. »

Dr Lior Bracha, from Kadima-Tzoran, near Netanya on the central coast, was one of two volunteer family doctors with Israel United Hatzalah, one of the first organizations to reach Moldova after the outbreak of war .

Among those accompanying him were Idan James, a farmer from Kibbutz Sa’ad in Israel’s southern Negev desert, and Jacob Krygier, who immigrated to Israel from Canada four years ago.

The organization has helped transport Israelis and Ukrainians with close relatives in Israel to the Jewish state.

Also in Moldova were a delegation of volunteer doctors for the organization For Their Sake: Physicians for Holocaust Survivors, and one of the medical clowns from Dream Doctors.

A list of other Israeli organizations helping Ukrainian refugees can be found here.

If so, we have a request.

Every day, our journalists aim to keep you up to date with the most important developments that deserve your attention. Millions of people rely on ToI for fast, fair and free coverage of Israel and the Jewish world.

We care about Israel – and we know you do too. So today we have a question: show your appreciation for our work by join the Times of Israel communityan exclusive group for readers like you who appreciate and financially support our work.

You are a dedicated reader

We’re really glad you read X Articles from The Times of Israel over the past month.

That’s why we started The Times of Israel ten years ago – to provide discerning readers like you with must-read coverage of Israel and the Jewish world.

So now we have a request. Unlike other media, we don’t have a paywall in place. But since the journalism we do is expensive, we invite readers to whom The Times of Israel has become important to help support our work by joining The Times of Israel community.

For just $6 a month, you can help support our quality journalism while benefiting from The Times of Israel WITHOUT ADVERTISINGas well as access Exclusive Content only available to members of the Times of Israel community.

Thank you,
David Horovitz, founding editor of The Times of Israel