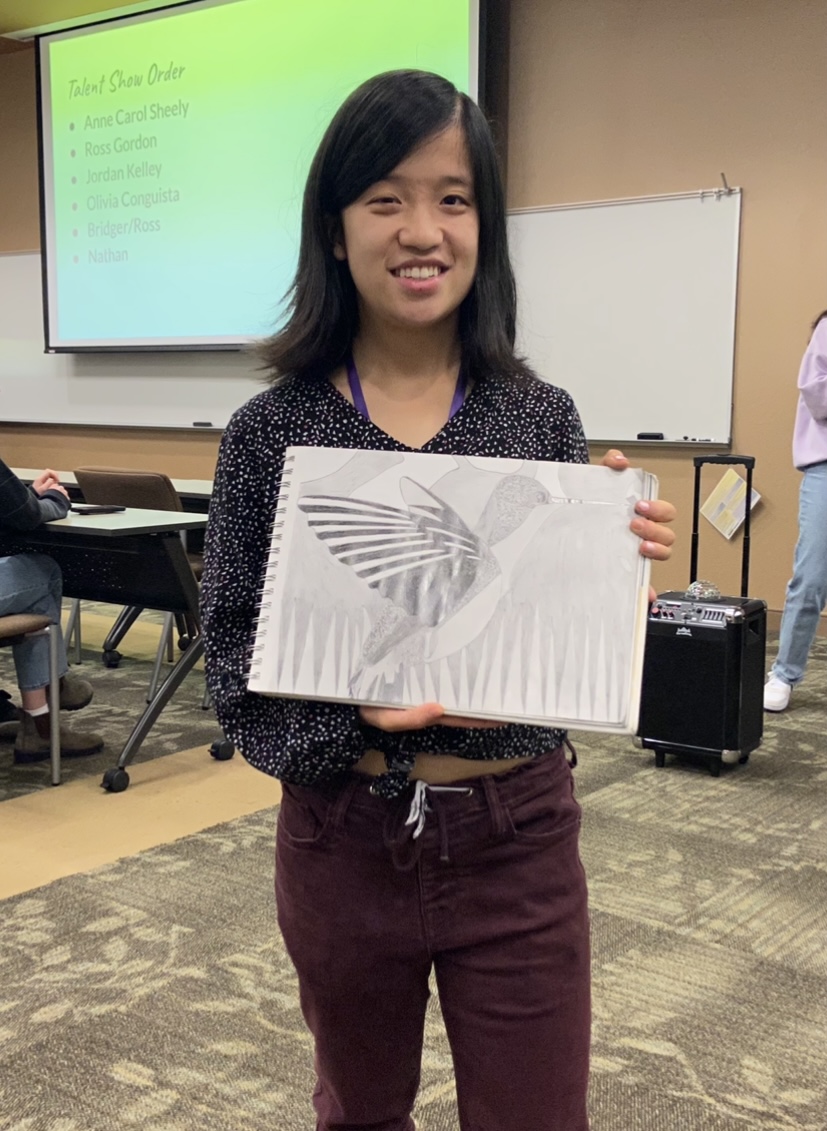 The Best Buddies Organization Hosts a Talent Show – The Appalachian

Olivia Congiusta shows off her drawing of a hummingbird at the November 2 talent show.

The Scholars with Diverse Abilities Appalachian Best Buddies organization hosted a talent show for its members on November 2.

App Status Diverse Ability Scholars Program allows scholars to attend classes and engage in the university community for up to two years. Best Buddies works with SDAP to create an inclusive community where members can engage with others and build friendships, according to the organization. website.

According to Jordan Kelley, president of the Best Buddies chapter, the group organized the talent show to allow its attendees to engage with each other, show off their skills, and create a fun and safe environment.

“We pair people with and without intellectual and developmental disabilities in friendships with friends to create a more inclusive community,” Kelley said.

Kelley said the Best Buddies program allows colleges and friends to attend events and have fun.

“It’s just a fun time with the club,” Kelley said. “We all brag about each other so much. So that’s great.

A total of seven participants performed during the event.

Anne Carol Sheely was the first to perform. She sang “Come Back…Be Here” by Taylor Swift.

Next, Ross Gordon engaged the audience by singing “Just Wanna Be With You” from “High School Musical 3: Senior Year.”

Kelley then took his turn with his cover of “Burn” from the musical “Hamilton.”

Olivia Congiusta showed his talent by showing his drawing of a hummingbird.

Later, Bridger Robinson and Gordon joined in to sing a duet of “Don’t Ya Wish U Were Us?” from the movie “Lemonade Mouth”.

Nathan Sanchez then took the stage to sing the song “In the End” by Linkin Park. During the performance, the lights were dimmed and the energized crowd waved their cellphone flashlights as Sanchez performed.

The audience cheered as Sam Butcher performed One Direction’s “What Makes You Beautiful,” joined by backup dancer Tokel Boyd.

Some students said that performing in the talent show allowed them to express themselves and express their interests.

“Dancing has always been who I am as a person,” Boyd said after her performances. “That’s just how I describe myself.”

Robinson said her song choice was influenced by other bands for the performance.

“The music is just very right in your face, high energy,” Robinson said. “Like the Beastie Boys and the Red Hot Chili Peppers.”

Kelley reflected on the group and its participants, saying, “Academics are super awesome.”

The organization, which meets every other Wednesday evening, plans to organize more activities for its members. The organization will host a Friendsgiving event on November 16.

Researcher and economist Dr Kannan Vishwanatth was crowned Honoris Causa for economics at the Latvian Academy of Sciences in Riga.